Hanging in the Lodge room of the Pambula Masonic Center is a lithograph of numerous masonic symbols, coats of arms, etc. It is dated 1882 for copyright registraion and was printed by the Brotherhood Professional Art Society, Boston, USA. 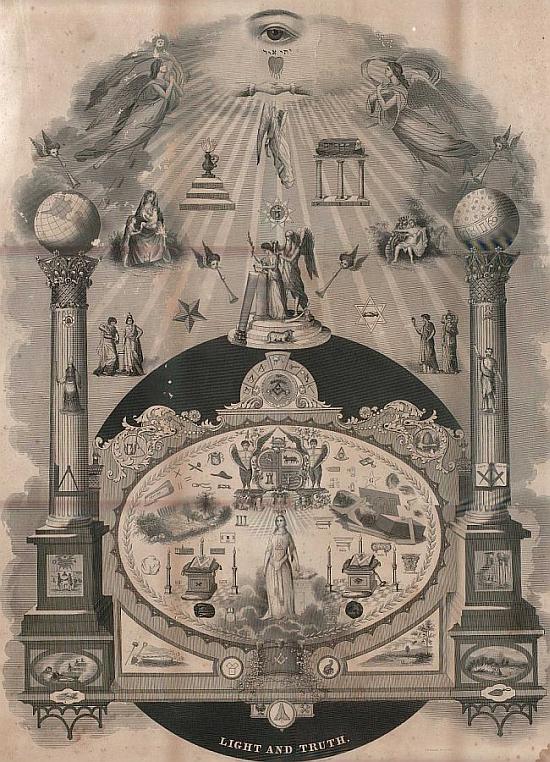 Two names appear on the bottom and can only be read on the original with a magnifying glass eg HA Fowler and TC Fielding (interesting initials). Another name at the right bottom under the pillar reads JH Daniels Pr, Boston. Presumably the printer. The lithograph is approximately A1 size and the image here was obtained by scanning 6 times with an A4 size scanner and joining the pieces with photoshop. The full sized image is 2524x 2739 pixels which is a bit large for a web page.

The lithograph belonged to Lodge Baddeley, the former owners of the Center, and it has been around for so long that none of the present members can shed any light on where it came from. The symbols illustrated so beautifully cover many orders and degrees so we are fairly certain that it was not a tracing board for one particular order.

If anyone reading this has anything to contribute by way of information about its reason for being, please drop us an email using this link

The Librarian of the Pensylvania Grand Lodge emailed the following information:

The illustrations are taken straight out of Jeremy Cross' True Masonic Chart (which I'm sure you can find on the Internet...). These were very common from about 1820 until toward the end of the 19th century. Like stained-glass windows or hornbook primers, they were teaching tools - in this case about Masonry. There were a "zillion" variations, and many of them were very colorful. Otherwise, there's not much to say...

The following text has been copied from the California Grand Lodge web site:

THE DOOLITTLE PICTURES
(Engraver of the Cross Masonic Chart)

The pictures which illustrate the emblems of the three degrees - either on a chart hung on the wall, supported on an easel, or by means of lantern slides and a projector - are practically universal in American Freemasonry. The curious uniformity and the unquestioned poor art of the vast majority of these illustrations bear testimony to the universality of Masonic thought in the forty-nine Grand Jurisdictions of the nation. For practically all of them are either copies of the originals of Amos Doolittle, Connecticut engraver, or adaptations from them.

KEY TO MASONIC CHART OF “LIGHT AND TRUTH

This engraving takes from the Hebrew, Yer he eour, “Let there be Light,” and Ho-a-mess, “The Truth”.

At the top is the all-seeing Eye of Omniscience, whose transcendent rays flood the figures F.H.C. in a blaze of glory.

The sun, moon, and seven stars underneath, typify - The sun to rule the day, the moon the night; the seven stars, the number of brethren requisite to form a P.L., also the hebdomadal (seven days) division of time.

In the centre is the Bleeding Heart. Below, again, the hands clasped is a symbol of Unity, Friendship, and Brotherhood.
Our first Lodge is here depicted in the form of an Ark, supported on the three pillars, W. S. and B.

On the left is the pot of incense at the top of the three steps.

The Serpent, entwining the Cross in centre of Star with Latin inscription illustrates the recovery of our Saviour’s tomb from the infidels.

Charity is here illustrated on the left by the Widow and Children; on the right, by the Good Samaritan.

On the top of the Globe is the representation of a virgin bending over a broken column, studying the volume of the Sacred Law. In her right hand, holding a sprig of Acacia, the emblem of grief; in her left, a pot of incense, emblematic of a pure heart.

Behind her, with the Scythe and Hour-glass at his feet, is Father Time, counting the braids of her hair - teaching us a lesson that time and perseverance overcome all difficulties.

On the left is the Morning Star; on the right the Hebraic sign, meaning the “Shield of David.”

The female figures on either side represent the four Cardinal Virtues.

The Dark Globe shows the World, the sphere of our labour, illuminated in the oval by the light of F.M.

At the top of the illustration of the … degree.

On either side of this may be seen various working tools and emblems of the Order.

On the left is a group of seven brethren, forming a … on its travels, turning neither to the right nor left. On the right the Lodge Jewels are shown.

The various Orders of Architecture are delineated underneath.

The central figure shows Truth pointing to the volume of the S.L.

On either side are the Pedestals, emblematic of …, surrounded by the three candles.

Below is seen the 47th problem, opposite the Steward’s emblem.

On the left again is the sprig of Acacia at the head of the grave; on the right an emblem of Plenty, showing C. W. and O.

The two colossal pillars at the entrance of the … are beautifully depicted.

Above you will see two brethren meeting on the square, extending to each other the right hand of friendship.

On the pillars opposite to each other are depicted the two great Parallels in Masonry.

The Chapiters on the Pillars are enriched with Network, Lily work, and rows of Pomegranates.

The Terrestrial and Celestial Globes placed at the top of the pillars are indicative of the Universality of F.M.
Prideaux, Printer, Maldon

My thanks to Glenys Waldman for supply the information about this work, and also to the mason who steered me in her direction. Also, thanks to VW Bro Neil Wynes Morse, the Canberra Curmudgeon for the above key.