Our Grand Master, MW Bro Derek Robson, AM, visited the Far South Coast over the weekend of 14th-16th September 2018. He and partner Gael were accompanied by RW Bro Andy Conlon, the Grand Director of Ceremonies and his wife Barbara. The main purpose of their visit was to attend the Installation ceremony held at the Bega Masonic Centre on the Saturday night and also to visit the Pambula Masonic Centre to view the refurbishment of the kitchen to commercial standard for which the Grand Lodge provided funding.

Following is an extract of an article which appeared in the Bega News following an interview by the paper with the Grand Master:-

"Bega Lodge welcomed a very special guest on the weekend for its annual installation meeting and banquet". 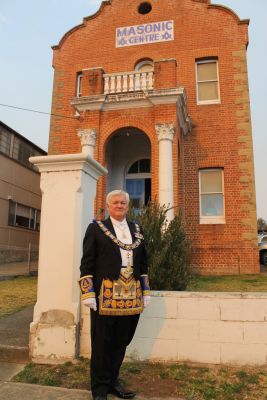 He joined Bega Lodge’s Worshipful Master David Porter and other local Masons for the annual installation meeting – essentially a changeover meeting and a banquet with partners and families afterwards.

There’s a wide-held perception the Freemasons is a secretive society, inspiring many blockbuster films and best-seller books with their mysteries and links to antiquity.

Mr Robson said the “signs and secrets” of the Freemasons were a fundamental element of the group’s history and that one of the key values of the group is confidentiality, along with integrity, goodwill, loyalty and respect.

“If you’re not a member of the police, or a business firm, you wouldn’t expect to know everything that goes on in them – Freemasonry is no different,” he said on Saturday while visiting the Bega Masonic Hall.

“There has to be an understandable level of secrecy, but it’s more out there than it is in here.”

Mr Robson said the origin of the Masons lay in the building of King Solomon’s Temple in the mid-10th Century BCE, but it became more prevalent in the age of skilled stonemasonry during the Middle Ages.

With workers and skilled tradesmen coming from all corners of the globe to construct temples and cathedrals, secret code words and handshakes were used to indicate to the foreman at what level the person could be employed while avoiding any language barriers.

These days, the rituals, handshakes and code words are still used in the “theatre” of Lodge meetings, Mr Robson said.

“Everything has a message,” he said pointing to the various symbols and diagrams dotted around the Bega Lodge room.

“Everything we do is by the square, on the level,” he added, referring to the recognisable symbol of Freemasonry – the square and compass.

“And the compass is an indication of keeping passions within bounds, living a life of uprightness.”

Mr Robson said he had a particular interest in fostering closer ties between Sydney and regional Lodges.

He said there are 276 Lodges across NSW and the ACT, but that he was the first Grand Master from outside Sydney to have been elected to the role.

“There’s plenty of opportunity in Sydney itself, with Lodge meetings every night of the week,” he said.

“But I firmly believe in keeping rural members and Sydney together, gathering experience from each other and making sure everyone across the organisation is involved.”

For anyone interested in the Freemasons and what happens at the Bega Masonic Hall, an open day is taking place on Saturday, September 29, from 12-5pm.

There will be a free sausage sizzle and guided tours of the hall to see all its historic photographs and displays.

The Lodge room itself will even be open, offering the curious an insight into the organisation."