District Grand Inspectors of Workings are appointed by Grand Lodge for a 2 year term at the end of which it is customary for the outgoing officer to transfer his collar jewel to the incoming officer. The ceremony although brief, is very important as the DGIW is the Chief Executive Officer, CEO, of the District. On 25th August 2018 at Lodge Pambula Daylight's regular meeting VW Bro Bernie Alcock transferred the district 49B collar jewel to VW Bro Ron Jaajaa for his 2018-2020 term of office. Elsewhere on the site is a brief history of this district which was District 105. Present at this meeting were 7 former DGIW's for Districts 105 and 49 plus the Worshipful Master of Lodge Cooma Monaro as both the retiring and incoming DGIW are members of that Lodge. 20 Brethren witnessed the ceremony with Grand Officers in their grand regalia foring a Guard of Honour for the entrant and retirement of the two Officers. 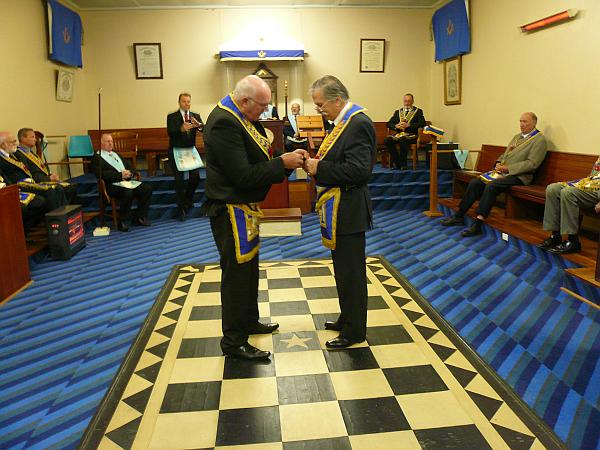 In Transferring the jewel, VW Bro Alcock delivered the following charge which we believe originated from a Scottish installation ceremony and which has been modified to suit our own requirements:-

"Very Worshipful Brother Jaajaa, having being honoured with the suffrages of the brethren of District No. 49B, you have been appointed by the United Grand Lodge of New South Wales and The Australian Capital Territory to the most important office of District Grand Inspector of Workings. This expression of their esteem and respect should draw from you corresponding feelings and your demeanor should be such as to repay the honour that Grand Lodge has so conspicuously bestowed upon you by an honourable and faithful discharge of the duties of this high office.

You have accepted a trust to which is attached a weighty responsibility, yet I am very confident that you will always be seen as an example to the Lodges of your district, which they need never hesitate to follow. As the retiring District Grand Inspector of Workings it is now my duty to transfer to you the jewel of office of District Grand Inspector of Workings for District No.49B which I now affix to your Collar and allow me to congratulate you on your appointment." 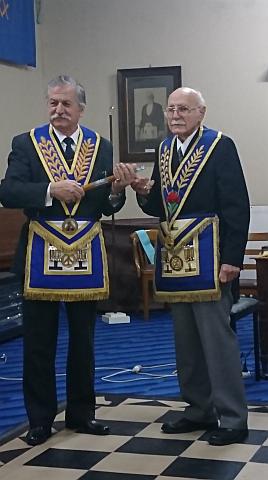 The District Grand Inspector of Workings is also the custodian of the District 49B Baton for use by Regional Grand Directors of Ceremonies at District Installation meetings. It was presented to VW Bro Ron Jaajaa by VW Bro Kevin Perry, PDGDC, who in fact made the baton from a piece of timber that he acquired when the original South was replaced in 1980. The piece of timber was part of the ridge beam in the roof and as its function in life no longer existed, it was put to good use by avoiding the need for GDC's to borrow a baton when they need one. Coincidentally the gentleman in the photo on the wal is Charles Henry Baddely who was the founder of Lodge Baddeley which was consecrated in 1892 and which met in the old Promary School building to which the South referred to was attached. Charles Baddeley was the Master of the Mountain Lodge at the time and he never became the Master of the Lodge that bore his name. See here for the history of Loodge Baddeley. 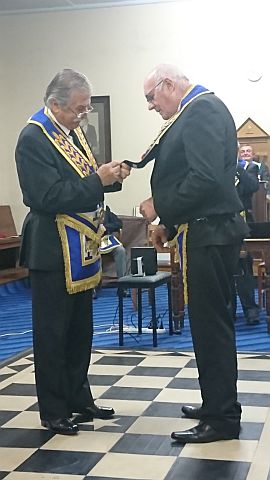 To complete the ceremony VW Bro Jaajaa, DGIW, attached a Past DGIW jewel to the collar of VW Bro Bernie Alcock, PDGIW 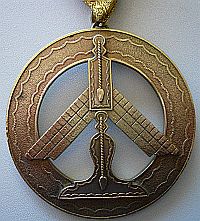