Lost History of the Freemasons
Conspiracy theories abound about the Freemasons. But Scotland’s true Masonic history, while
forgotten by many for centuries, remains hidden in plain sight.


With its cobblestone paving and Georgian façades, tranquil Hill Street is a haven in Edinburgh’s busy New Town. Compared to the Scottish capital’s looming castle or eerie closes, it doesn’t seem like a street with a secret. 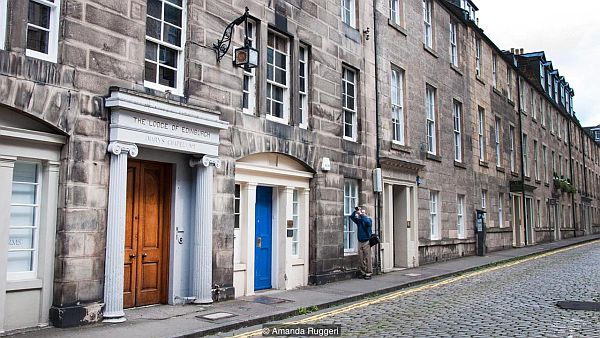 Walk slowly, though, and you might notice something odd. Written in gold gilt above a door
framed by two baby-blue columns are the words, “The Lodge of Edinburgh (Mary’s Chapel) No
1”. Further up the wall, carved into the sandstone, is a six-pointed star detailed with what seem –
at least to non-initiates – like strange symbols and numbers.

Located at number 19 Hill Street, Mary’s Chapel isn’t a place of worship. It’s a Masonic lodge.
And, dating back to at least 1599, it’s the oldest Masonic lodge still in existence anywhere in the world.

That might come as a surprise to some people. Ask most enthusiasts when modern Freemasonry
began, and they’d point to a much later date: 1717, the year of the foundation of what would
become known as the Grand Lodge of England. But in many ways, Freemasonry as we know it
today is as Scottish as haggis or Harris tweed. 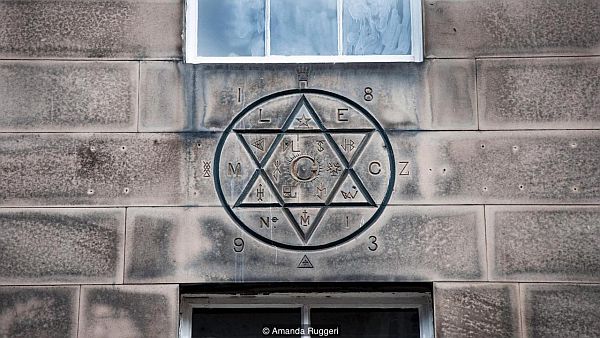 At 19 Hill Street, look up to see this six-pointed star, a Masonic symbol (Credit: Amanda Ruggeri)

From the Middle Ages, associations of stonemasons existed in both England and Scotland. It was
in Scotland, though, that the first evidence appears of associations – or lodges – being regularly
used. By the late 1500s, there were at least 13 established lodges across Scotland, from
Edinburgh to Perth. But it wasn’t until the turn of the 16th Century that those medieval guilds
gained an institutional structure – the point which many consider to be the birth of modern Freemasonry.

Take, for example, the earliest meeting records, usually considered to be the best evidence of a
lodge having any real organisation. The oldest minutes in the world, which date to January 1599,
is from Lodge Aitchison’s Haven in East Lothian, Scotland, which closed in 1852. Just six months
later, in July 1599, the lodge of Mary’s Chapel in Edinburgh started to keep minutes, too. As far
as we can tell, there are no administrative records from England dating from this time.

“This is, really, when things begin,” said Robert Cooper, curator of the Grand Lodge of Scotland
and author of the book Cracking the Freemason’s Code. “[Lodges] were a fixed feature of the
country. And what is more, we now know it was a national network. So Edinburgh began it, if you like.”

I met Cooper in his office: a wood-panelled, book-stuffed room in the Grand Lodge of Scotland
at 96 George Street, Edinburgh – just around the corner from Mary’s Chapel. Here and there
were cardboard boxes, the kind you’d use for a move, each heaped full with dusty books and
records. Since its founding in 1736, this lodge has received the records and minutes of every
other official Scottish Masonic lodge in existence. It is also meant to have received every record
of membership, possibly upwards of four million names in total. 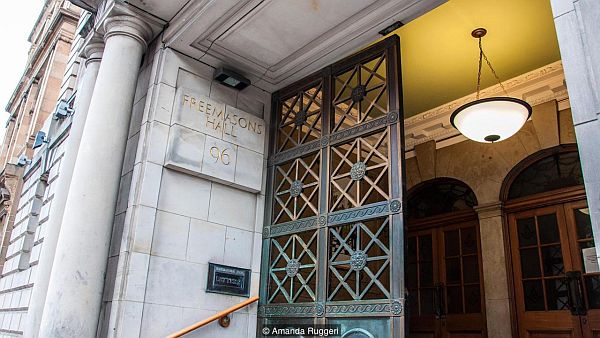 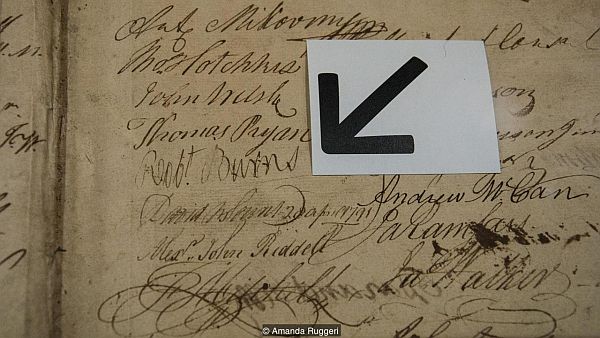 One of the items on display at the Grand Lodge of Scotland’s museum is its membership record
with the signature of famed Freemason Robert Burns (Credit: Amanda Ruggeri)

That makes the sheer number of documents to wade through daunting. But it’s also fruitful, like
when the Grand Lodge got wind of the Aitchison’s Haven minutes, which were going for auction
The curator of the Grand Lodge of Scotland
in London in the late 1970s. Another came more recently when Cooper found the 115-year-old
membership roll book of a Scottish Masonic lodge in Nagasaki, Japan. 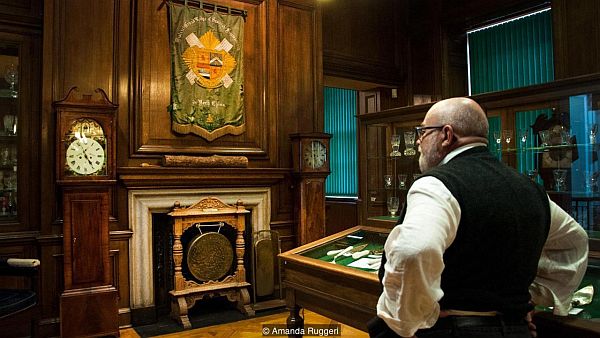 The curator of the Grand Lodge of Scotland, Robert Cooper, looks over the lodge’s museum
(Credit: Amanda Ruggeri)

That internationalism was on full display in the Grand Lodge of Scotland’s museum, which is
open to the public. It was full of flotsam and jetsam from around the world: a green pennant
embroidered with the “District Grand Lodge of Scottish Freemasonry in North China”; some 30
Masonic “jewels” – or, to non-Masons, medals – from Czechoslovakia alone.

Of course, conspiracy theorists find that kind of reach foreboding. Some say Freemasonry is a
cult with links to the Illuminati. Others believe it to be a global network that’s had a secret hand
in everything from the design of the US dollar bill to the French Revolution. Like most other
historians, Cooper shakes his head at this. 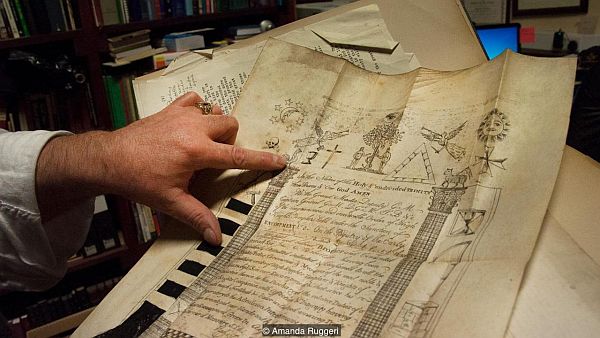 Cooper points to the Masonic symbols on one of the many historic documents in the lodge’s
archive (Credit: Amanda Ruggeri)

Some of the mythology about Freemasonry stems from the mystery of its early origins. One
fantastical theory goes back to the Knights Templar; after being crushed by King Philip of France
in 1307, the story goes, some fled to Argyll in western Scotland, and remade themselves as a
new organisation called the Freemasons. (Find out more in our recent story about the Knights
Templar).

Others – including Freemasons themselves – trace their lineage back to none other than King
Solomon, whose temple, it’s said, was built with a secret knowledge that was transferred from
one generation of stonemason to the next.

A more likely story is that Freemasonry’s early origins stem from medieval associations of
tradesmen, similar to guilds. “All of these organisations were based on trades,” said Cooper. “At
one time, it would have been, ‘Oh, you’re a Freemason – I’m a Free Gardener, he’s a Free
Carpenter, he’s a Free Potter’.”
For all of the tradesmen, having some sort of organisation was a way not only to make contacts,
but also to pass on tricks of the trade – and to keep outsiders out.

But there was a significant difference between the tradesmen. Those who fished or gardened,
for example, would usually stay put, working in the same community day in, day out.

Not so with stonemasons. Particularly with the rush to build more and more massive, intricate
churches throughout Britain in the Middle Ages, they would be called to specific – often huge –
projects, often far from home. They might labour there for months, even years. Thrown into that
kind of situation, where you depended on strangers to have the same skills and to get along,
how could you be sure everyone knew the trade and could be trusted? By forming an
organisation. How could you prove that you were a member of that organisation when you
turned up? By creating a code known by insiders only – like a handshake. 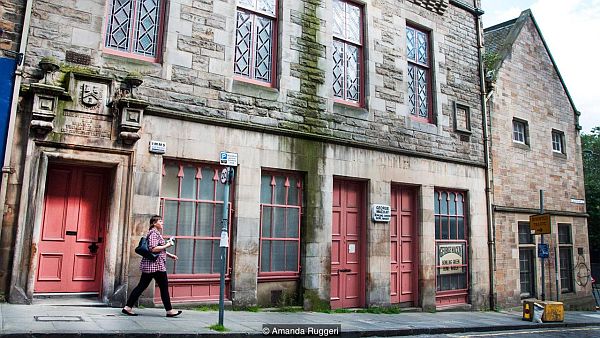 Edinburgh's Lodge of Journeyman Masons No. 8 was founded in 1578; this lodge was built for it
on Blackfriars Street in 1870 (Credit: Amanda Ruggeri)

Even if lodges existed earlier, though, the effort to organise the Freemason movement dates
back to the late 1500s. A man named William Schaw was the Master of Works for King James VI
of Scotland (later also James I of England), which meant he oversaw the construction and
maintenance of the monarch’s castles, palaces and other properties. In other words, he
oversaw Britain’s stonemasons. And, while they already had traditions, Schaw decided that they
needed a more formalised structure – one with by-laws covering everything from how
apprenticeships worked to the promise that they would “live charitably together as becomes
sworn brethren”.

In 1598, he sent these statutes out to every Scottish lodge in existence. One of his rules? A notary
be hired as each lodge’s clerk. Shortly after, lodges began to keep their first minutes.

“It’s because of William Schaw’s influence that things start to spread across the whole country.
We can see connections between lodges in different parts of Scotland – talking to each other,
communicating in different ways, travelling from one place to another,” Cooper said. 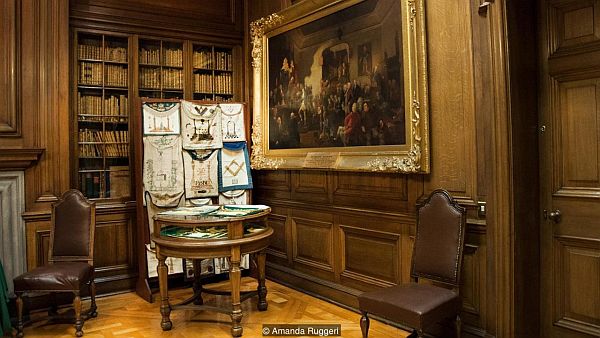 This oil painting at the Grand Lodge of Scotland shows Robert Burns’ inauguration at Lodge
Canongate Kilwinning No. 2, which was founded in 1677 (Credit: Amanda Ruggeri)

Scotland’s influence was soon overshadowed. With the founding of England’s Grand Lodge, the
English edged out in front of the movement’s development. And in the centuries since,
Freemasonry’s Scottish origins have been largely forgotten.

“The fact that England can claim the first move towards national organisation through grand
lodges, and that this was copied subsequently by Ireland (c 1725) and Scotland (1736), has led
to many English Masonic historians simply taking it for granted that Freemasonry originated in
England, which it then gave to the rest of the world,” writes David Stevenson in his book The
Origins of Freemasonry.

Cooper agrees. “It is in some ways a bit bizarre when you think of the fact that we have written
records, and therefore membership details, and all the plethora of stuff that goes with that, for
almost 420 years of Scottish history,” he said. “For that to remain untouched as a source – a
primary source – of history is really rather odd.”

One way in which most people associate Freemasonry and Scotland, meanwhile, is Rosslyn
Chapel, the medieval church resplendent with carvings and sculptures that, in the wake of Dan
Brown’s Da Vinci Code, many guides have explained as Masonic. But the building’s links to
Masonry are tenuous. Even a chapel handbook published in 1774 makes no mention of any
Masonic connections. 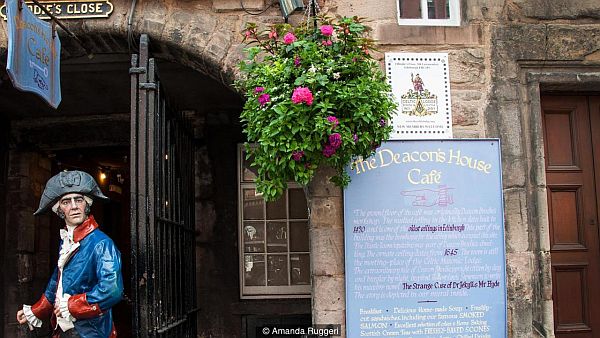 Hidden in plain sight on Brodie’s Close off of Edinburgh’s Royal Mile, the Celtic Lodge of
Edinburgh and Leith No. 291 was founded in 1821 (Credit: Amanda Ruggeri) 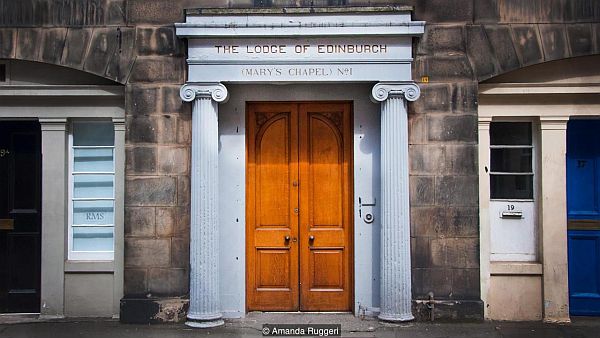 Mary’s Chapel may only be open to fellow Freemasons, but its location is anything but a secret
(Credit: Amanda Ruggeri)

Scotland’s true Masonic history, it turns out, is more hidden than the church that Dan Brown
made famous. It’s just hidden in plain sight: in the Grand Lodge and museum that opens its
doors to visitors; in the archivist eager for more people to look at the organisation’s historical
records; and in the lodges themselves, tucked into corners and alleyways throughout Edinburgh
and Scotland’s other cities.

Their doors may often be closed to non-members, but their addresses, and existence, are
anything but secret. 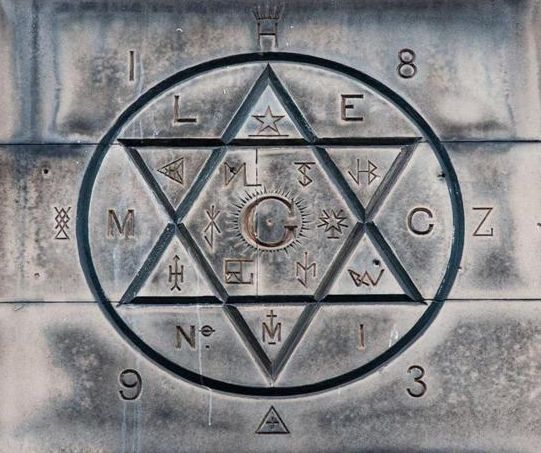 What do all these symbols mean? All but 2 of those inside the Star of David are in the editor's opinion, stonemasons marks.

Every Master of the craft had his own identifying Mark which could easily be made with a chisel to avoid curved lines.

The foregoing is an extract of the BBC document written by Amanda Ruggeri. The complete version can be downloaded as a pdf file from here, or by viting the BBC web site here.