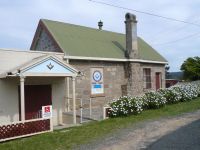 The first meeting of Lodge Baddeley  205 took place on 7 July 1892 "...amid a large and brilliant concourse of brethren worthy of the opening of the first lodge south of Moruya on the coast district".

Ninety six years later in 1988, Lodge Pambula Daylight 1000 was consecrated and currently shares the Center with Lodge Baddeley. The latter began as the result of a petition, raised by the Mountain Lodge (190) of Bombala, which was sent to Grand Lodge by Charles Henry Baddeley 1810-1892. He is recognized as founder of Lodge Baddeley and is also shown as the first W.M. for the Mountain Lodge, Bombala on Warrant No 920 issued 23 August 1862 by the UGL of England.

Initially Lodge Baddeley held its meetings in the Pambula School of Arts and although attempts were made to become independent, this situation continued for twenty-one years. From 24 June 1913 lodge meetings were held in the (old) school building (shown above), which still stands as a monument to the lodge's history.

In 1948 a building fund was opened and this paved the way for a new lodge room. Member numbers had risen significantly after the war and this was also reflected in the number of visitors to the lodge. By 1957 the new lodge room had been completed and it was dedicated by the Grand Master in August that year. During 1978-79 steps were taken to replace the old South. This was completed during 1980 and was dedicated by the Grand Master in April of that year.