Invitation from Most Excellent Companion ROB PEATTIE
Welcome,
It is essential that we ensure that every Companion, irrespective of where he might reside, be given the
opportunity to attend the highlight of our Order’s Masonic year, the colourful spectacle of the Grand ReInstallation
of the First Grand Principal and Grand Master and his Officers. With this in mind I have determined
the 2015/2016 Grand Re-Installation will be conducted in Batemans Bay thus completing the cycle of holding this
event in the metropolitan, northern, western and now southern part of this jurisdiction.
I would encourage all Companions, Craft Masons and their partners and families to join us at Batemans Bay
Soldiers Club for this open event and for what I believe will be a truly magnificent weekend by the sea in a most
scenic part of this great State.


Batemans Bay is a town in the South Coast region of the state of New South Wales, Australia. The
town is situated on the shores of an estuary formed where the Clyde River meets the Tasman Sea,
opening into a bay of the same name.
Located on the Princes Highway (Highway 1) about 280 kilometres south from Sydney and 760 km north
east from Melbourne. Canberra is located about 151 km to the west of Batemans Bay, via the Kings
Highway, Batemans Bay has a population reaching 20,000 with surrounding beach side communities
including Long Beach, Maloneys Beach and the coastal fringe extending south to Rosedale.
It is the closest seaside town to Canberra, making Batemans Bay a popular holiday destination for
residents of Australia's National Capital. Geologically, it is situated in the far southern reaches of
the Sydney Basin. Batemans Bay is also a popular retiree haven, but has begun to attract young families
seeking affordable housing and a relaxed seaside lifestyle. Other local industries include oyster
farming, forestry, tourism and retail services.
The village of Batemans Bay was surveyed in 1859. Oyster farming commenced in 1860. By 1870, there
was a fleet of 40 oyster boats. A sawmill was erected in 1870. The port was proclaimed in 1885. A ferry
service across the Clyde ran from 1891 until the bridge was opened in 1956. In 1942 during World War
II, a trawler was attacked by a Japanese submarine between Batemans Bay and Moruya.
Batemans Bay attracts everyone from watercolour artists and rock fishermen, to kids building
sandcastles, keen surfers and fishing enthusiasts. The coastline around Batemans Bay is stunning with
a string of golden beaches, mangroves, oyster flats, and sheltered coves. In the Batemans Bay Marine
Park you can go fishing, diving, snorkelling and boating. Enjoy the Clyde River on a lunchtime cruise; if
you enjoy oysters, don't miss the succulent local Clyde River oysters. 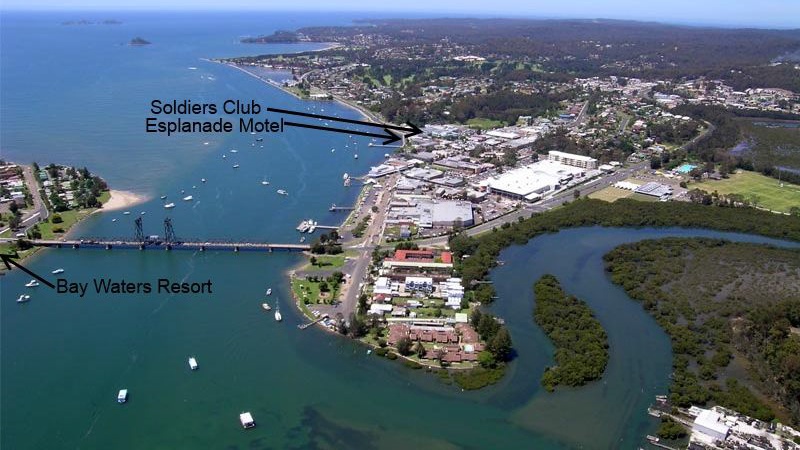 Drive south along Beach Road, stopping at a string of picturesque coves and beaches. Drop a line off
any number of good spots and you might hook a bream, flathead or mulloway. Enjoy a game of golf on
the 27-hole Catalina Country Club, rated one of the finest courses on the South Coast.
Don't miss Birdland Animal Park along Beach Road which has a diverse collection of Australian native
birds, an animal nursery, duck ponds and rides on a train through three hectares of parkland. There is
also the Batemans Bay Botanic Garden a couple of kilometres south of the town on the Princes
Highway.
Just 10km south of Batemans Bay you come to the quaint old town of Mogo with a variety of shops and
eating places. In Mogo there is the Old Gold Rush Village which is like walking through an Australian
gold rush village in the 1850’s.
There are all sorts here, Settler’s huts, Miner's tents, a Church, Gaol, Post Office, Wash house, Police
station, Blacksmith, Waterwheel, and more.
On the road from Mogo town to the beach town of Tomakin there is the famous Mogo Zoo which boosts
many species which are being bred so that they do not become extinct. The white Lions are extremely popular.


How to get there:
Road from Sydney either via the Princes Highway along the coastal route or Along the Hume
Highway to Goulburn thence to Braidwood and down the Clyde Mountain on the Kings Highway
Road from Melbourne either via the Princes Highway through Bairnsdale or up the Hume Highway
towards Canberra and then east via the Kings Highway.
Bus From Sydney Premier Bus Service, which is based in Nowra operates to and from Central Station
and the airport terminals
Rail/Bus from Melbourne Vline operate a service which is train from Southern Cross Station
transferring to a coach service to Batemans Bay
Bus From Canberra is operated by Murrays Bus Service
Air – Moruya Airport is only 30 K south of Batemans Bay and is serviced by Regional Express (REX)
from Sydney direct or from Melbourne via Merimbula


Sunday Morning (18th October 2015) commencing at 08:30 Social Breakfast, Mackay Park sport facility
Other activities are being investigated and will be published closer to the event.

The Esplanade Motel, part of the Batemans Bay Soldier
Club, is immediately opposite the club at 23 Beach Road.
The Esplanade offers a range of rooms from Clubside deluxe
@ $153, waterside deluxe @ $198 up to executive suites @
$308. Limited to a total of 23 rooms this will be for the early
birds. The free call number is 1800 659 884 email
This email address is being protected from spambots. You need JavaScript enabled to view it. or visit their site at www.esplande.com.au 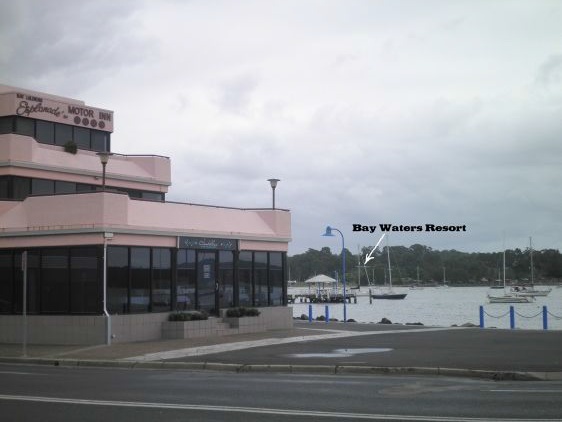 Bay Waters Holiday Resort is on the north side of the bridge
crossing of the Clyde River. It is about 700 metre from the
Soldiers Club, with a beautiful walk alongside the river and
across the bridge, has offered twin share rooms at $90 per night
including a continental breakfast in the dining room. The address is the corner of
Princes and Kings Highway behind the Caltex Service
centre. Road access is from a roundabout along Kings Highway.
Bookings are direct to the Resort referencing USGC to get this rate.
Telephone (02) 4472 6333.
web site: www.baywaters.com.au 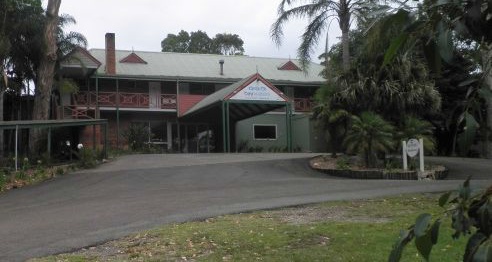