On 10th September 2016 Brethren of Lodge Cooma Monaro travelled to Bombala with Bro Terry Alcock for him to be raised to the 3rd degree of a Master Mason by the Brethren of the Mountain Lodge. There is a fraternal connection between these two Lodges being about 40 minutes apart and at one time made up District 104 on their own. The journey, expecially late at night on the way back is fraught with wildlife in the form of kangaroos and wombats so it can be a daunting night out. Despite these issues there were 24 present to witness the ceremony made up od 10 from Cooma Monaro, one from Bega Remembrance and one from Pambula Daylight and 12 from the Mountain Lodge. 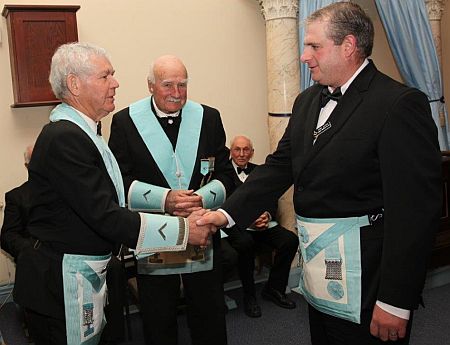 The Worshipful Master of Lodge Cooma Monaro, Bill Kelly congratulating Terry on his raising with the Master of the Mountain Lodge, Peter Williams looking on. 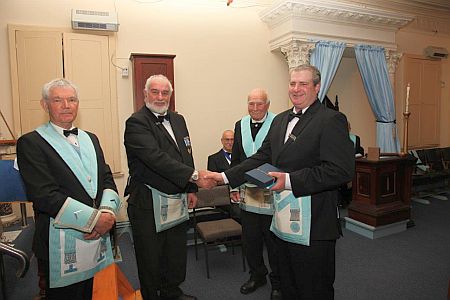 Terry's Father, Bro Charles Alcock presenting him with a Masonic Bible, a proud moment for both Father and Son. Terry's Brother Brad is a member of Lodge Bega Remembrance as is their Father Charles.

According to all reports, a good night was had by all expecially the enjoyable typical Mountain Lodge South