On Saturday morning 27th August 2016, some 28 years after its Consecration, Lodge Pambula Daylight conducted its very first double 3rd degree ceremony. The Candidates were our new members who had been living in the area temporarily while on the construction of the new Bega Hospital. They both wanted to become Freemasons and took the opportunity of joining while in this area. They were initiated in June 2015 and passed in August 2015.

To add a bit of colour to the ceremony Grand Officers wore their regalia and the DGIW, VW Bro Neil Dawson attended officially. Despite the small numbers in attendance, the ceremony went as planned and all enjoyed it immensely. Unfortunately for the Lodge the newly raised brethren have now moved to Canberra on a similar hospital construction project but that is only 3 hours away so the members of the Lodge are hopeful of seeing them again sometime soon. 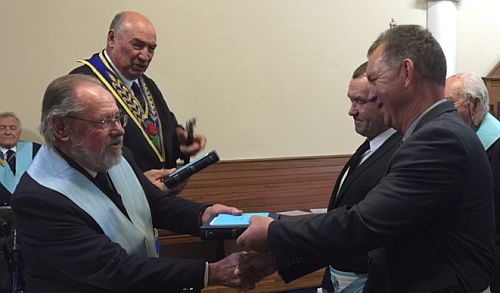 The Worshipful Master RW Bro Kevin Mulcahy presenting Munro and Larry with their souvenir bibles under the watchful eye of the Firector of Ceremonies, RW Bro Russell Yelds from the Mountain Lodge and whose presence certainly added to the success of the meeting. 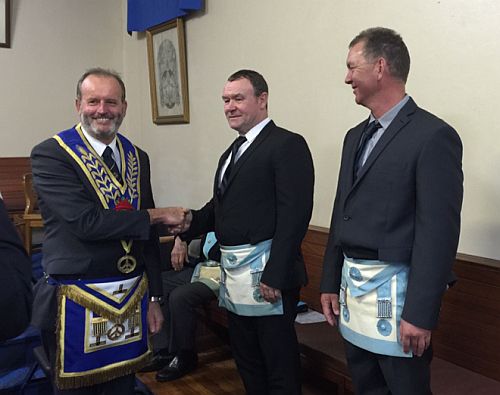