Saturday 16th September saw two very important events take place in the NSW jurisdiction of the UGL of NSW & ACT. One was the Quarterly Communication of Grand Lodge and the Proclamation of the Grand Master for a further term, held at Taree. The other was the Installation of Bro David Richmond Porter as Worshipful Master of Lodge Bega Remembrance for the coming 12 months. The representative of the Grand Master on this occasion was our well liked and respected Regional Grand Counsellor, RW Bro Bill Beattie, whose term of office ceased on the same night.

The installation ceremony was attended by some 43 Masons from Lodges in Cooma, Canberra, Bombala, Pambula, Moruya, Victoria and even South Africa. The Representative was supported by a delegation of 24 Grand Officers which included MW Bro Derek Robson, Immediate Past Grand Master, 5 Past Assistant Grand Masters, 3 District Grand Inspectors of Workings. The Grand Director of Ceremonies was RW Bro Kevin Mulcahy, PJGW, who claimed the evening as one of the most enjoyable installations he had been involved with.

A group photo of those who attended. 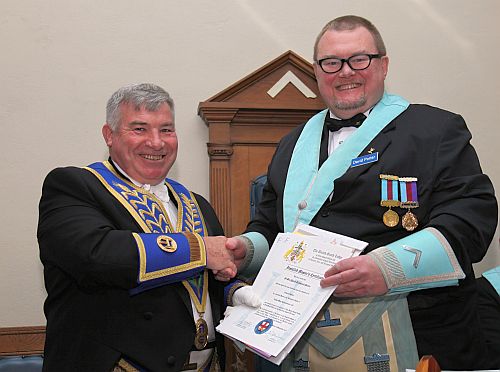 Presentation of the Installed Master's certificate by the Representative, Bill Beattie.

The delegation of Grand Officers. RW Bro Geoff Ludowyk was busy playing the organ and VW Bro Rob Nash had not arrived at this stage. RW Bros Malcolm Privett and Terry Twyford were required in the Lodgeroom 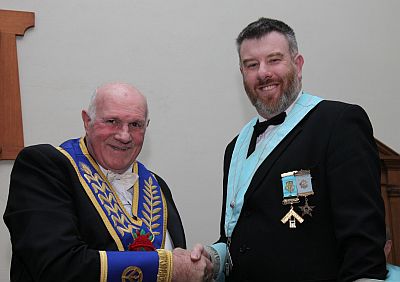 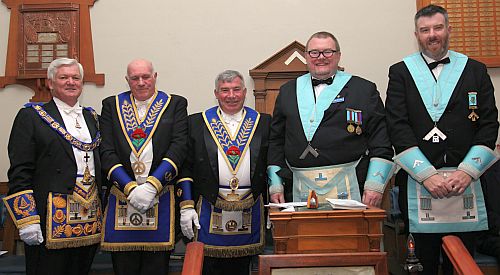 Lodge Bega Remembrance is to be congratulated on the effort involved in making this ceremony a memorable one for the new Master and his Officers, Not only did the ceremony run smoothly but the Festive Board provided good food and surprise entertainment. It would be safe to say a great time was had by all who attended.