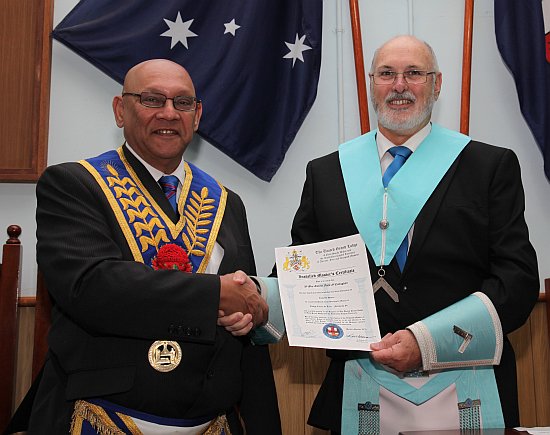 It is a rare occasion these days when a Master Mason is installed in the Chair of King Solomon. At Lodge Coeur de Lion - Narooma on Saturday 4th October 2014, Bro Bob O'Callaghan was very capably installed by the outgoing Master W Bro Alec Sklepic in the presence of the Grand Master's representative RW Bro Geoff Ludowyk, Regional Grand Counsellor for Region 4. The Grand Director of Ceremonies for the evening was VW Bro Kit Lee who made sure everything went according to plan in his usual efficient manner.

43 Masons from several Lodges witnessed the ceremony which was carried out with the usual proficiency we have come to expect from this Lodge. The work was excellent and those present were treated to a wonderful musical interlude by the Master of Lodge Guilford, W Bro Kevin Christmas who played Nessun Dorma on the French Horn accompanied by VW Bro Rod Bradford on the organ. 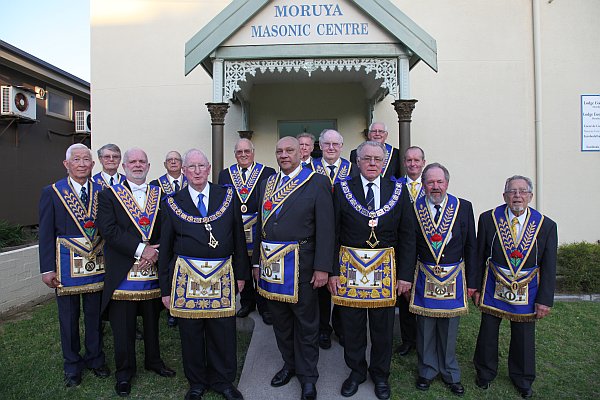 The Grand delegation assembled outside the Moruya Masonic centre for the customary photograph. Included in those present were a PDGM, two PAGM's. two DGIW's, The RGC representing the GM, several PJGW's, three PDGIW's and two PDGDC"s. RW Bro Bruce Davies, PAGM was busy taking the photo. 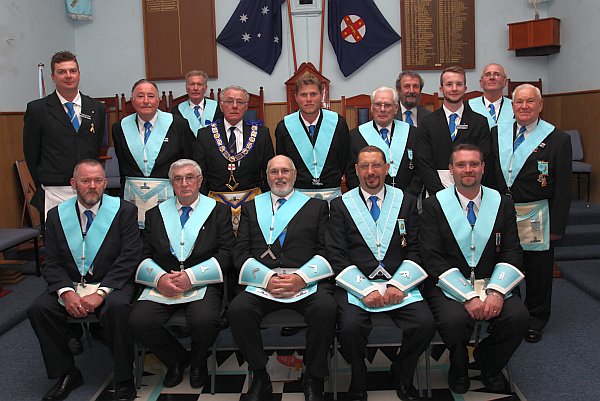 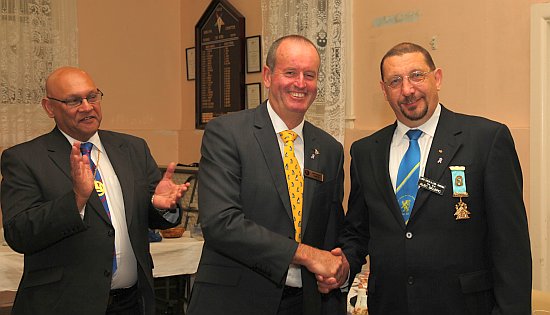 At the request of the GM's Representative, the DGIW for District 49, VW Bro Neil Dawson, presents the Immediate Past Master, W Bro Alec Sklepic, with his Past Master's jewel. It was a night for colourful neckties. 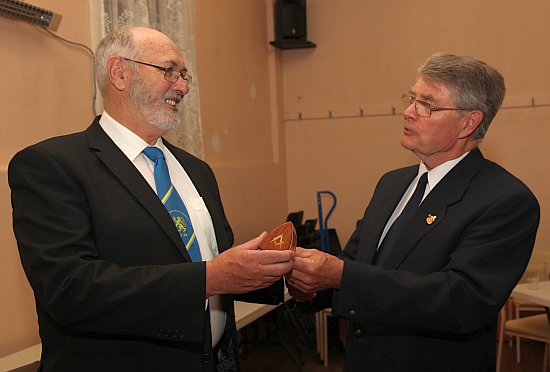 Carrying on the tradition of the Travelling Gavel, RW Bro Privett presents it to the New Master on behalf of the last recently installed Master who was W Bro Ray Spencer of Lodge Bega Remembrance. 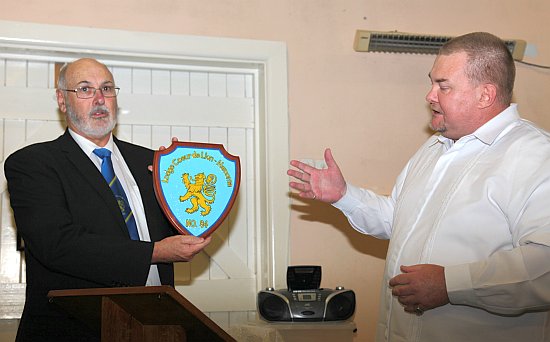 Bro David Porter from Pinatubo Lodge in the Philippines, presents WM Bob with a plaque that he had made for the Lodge following a visit at last year's installation ceremony. David is a local lad and his parents live at Tathra near Bega. 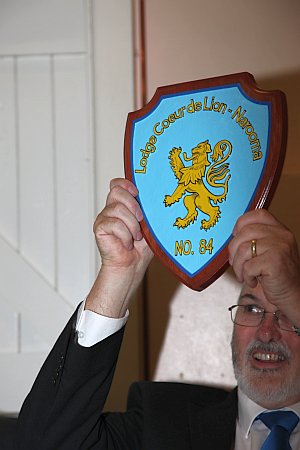 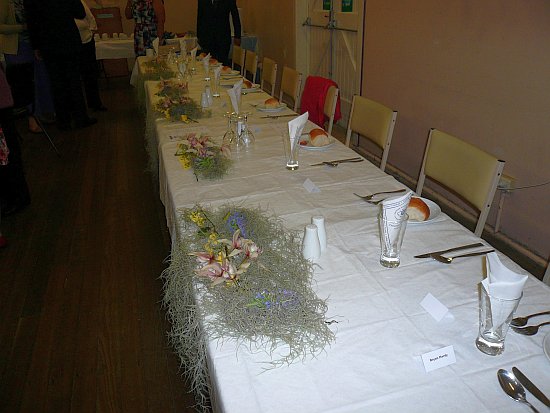 The Ladies, as usual, did a wonderful job decorating the tables for the Festive Board. Some 60 Brethren and partners enjoyed an excellent meal in a more than happy atmosphere. The speeches and toasts were well received especially the toast to the Ladies by the Senior Warden, John Low, who had obviously put in a lot of thought, time and effort into his presentation. He was ably assisted by "Lady" Penny the IPM's partner, who presented some "awards" to some of the Lodge members. 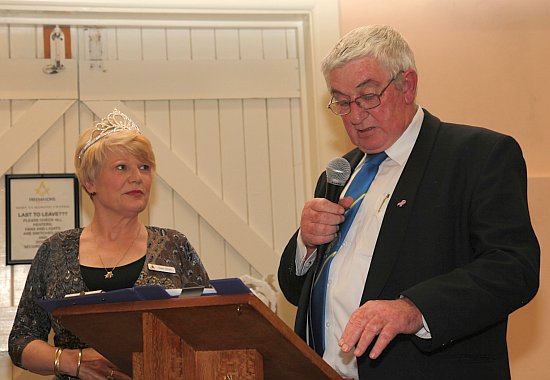 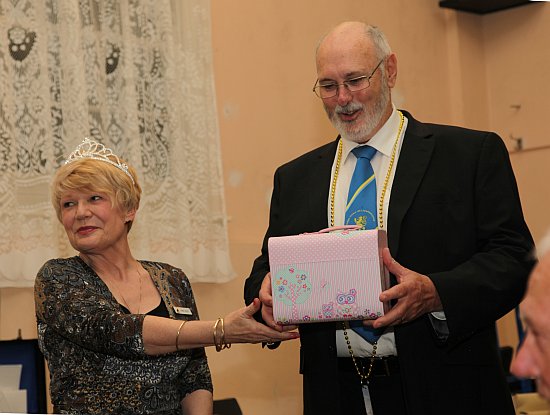 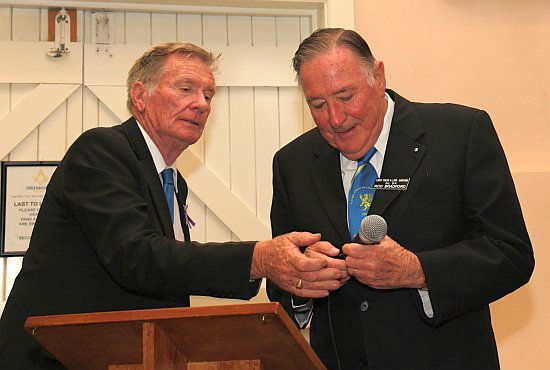 The Director of Ceremonies attempting to show VW Bro Rod Bradford how to switch on the microphone. 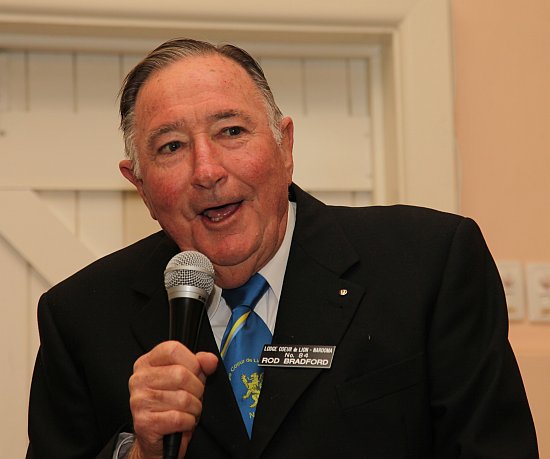 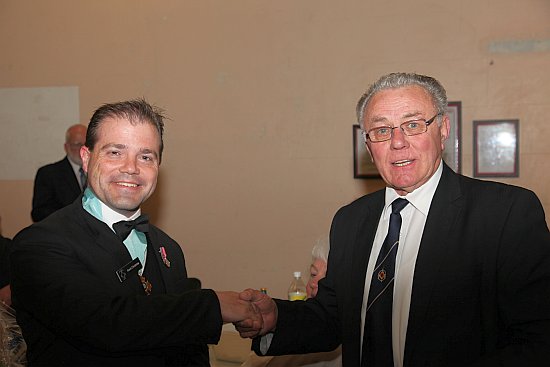 Allan Brown presents Kevin Christmas with a Lodge coffee mug and pen for his efforts in the Lodgeroom on the trumpet and the French Horn. Kevin was installed as Master of Lodge Guildford last month. He is also the Grand Herald and a musician in the Army. His interlude in the Lodgeroom was received with enthusiastic acclamation.

The enthusiasm and dedication demonstrated at this ceremony augers well for an excellent forthcoming year for this Lodge. Visiting it is hightly recommended.