On 6th January 2013, Freemasonry lost one of her favourite sons with the passing of RW Bro Noel Fleming (Chappie) Munn, Past Junior Grand Warden, a little over 3 weeks after celebrating his 88th birthday. Chappie is survived by his wife Ethel, five children, twenty grand-children and eight great-grand-children. His funeral was held at St Joseph’s church, Merimbula on 16th January and was attended by some 350 people including around 70 Freemasons many of whom had travelled long distances to farewell their esteemed brother. 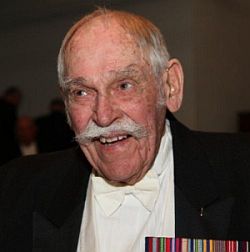 Chappie’s health had been slowly deteriorating over the past three or four years. He was admitted to Bega hospital at 11pm on 3rd January and was transferred to Canberra Hospital 24 hours later. He suffered a massive heart attack at 1am 5th January and passed to the Grand Lodge above at 7am on Sunday morning.


He became a Freemason on 15 June 1954 when he joined Lodge Harmony in Wagga.  It was the start of what was to become a long and distinguished Masonic career from which Freemasonry, Chappie and the Community would benefit during the following fifty eight and a half years.


Chappie was also the foundation Senior Warden of Lodge Forest Hill which was consecrated near Wagga in November 1957. He was the Master of this Lodge the following year and was to remain a member of that Lodge for the next 40 years.
In November 1988 he became a foundation member of another new Lodge, this time Lodge Pambula Daylight.  He was still a member here when he passed away and had served in all progressive offices except that of Master.  When asked if he would like to be installed as Master he said he would but wanted to wait for his 60th year as a Mason.  This would have been at the Lodge’s next installation ceremony in November this year.


Grand Lodge Honours were conferred on Chappie in 1984 and 10 Years later he was appointed District Grand Inspector of Workings.  His district, the former 103, covered the area from Bateman’s Bay to Pambula and contained 8 Lodges which he visited on a regular basis.  The rank of Past Junior Grand Warden was conferred on Chappie in March 2005.


Chappie Joined the Southern Counties Royal Arch Chapter, New South Wales Constitution, in 1956 and was elected the Third Principal in 1961.  He joined the Pambula Royal Arch Chapter in 1987 and the following year was installed as the First Principal, a position he held again the following year.  Chappie Munn joined The Brothers Cooma Conclave of the Order of the Secret Monitor in 1991.  He was the Supreme Ruler of that Conclave in 1995 and was appointed a Grand Council Steward in 1997.  He served progressively and continuously in all the active Grand Council positions up to his appointment as the Grand Chancellor in 2005.  Chappie was the Foundation Counsellor of the Narooma Conclave which was consecrated on the 25th July 2000.  Since the very early days of his membership of this Order Chappie has been a Serving Officer of one or both of those Conclaves. He loved his Freemasonry and with his dear wife Ethel, travelled all over the State and beyond to meet on the square with his Brethren and friends.  Chappie was involved in many Orders including a Sublime Prince of the Royal Secret Thirty Second Degree of the Ancient and Accepted Rite.


Chappie could always be relied on to produce an interesting, (but usually lengthy), talk about any topic you could think of.  He was one of those rare souls who could talk for 15 minutes or an hour without notes and yet hold the interest of his audience.  His Caring Officer’s reports were legend.  He frequently started his report by talking, for example, about an anniversary on that day of a battle in the Pacific during WW2, and finish up by reporting on any sick members that he had contacted.
Apart from being the Lodge Chaplain, he was also Pambula Daylight Lodge’s Membership Officer, Caring Officer, Historian, Education Officer, Charities Representative, Mentor and advisor on all matters Masonic or any other topic that might arise from time to time.  His passing will leave a huge empty space that will be very difficult if not impossible to fill. A measure of his standing in Masonic circles was evidenced by the presence of the Grand Master at the funeral service. 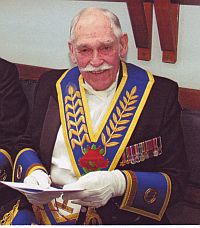 Chappie can also be proud of his service career in the Royal Australian Air Force which he joined on 9 June 1943. He had numerous postings during his career with most of his time being spent at Wagga from 1947 to 1961. His promotion through the ranks was quite speedy until he resigned his commission on 15 August 1979 as Wing Commander.

Family Eulogy - delivered by son Guy Munn
A life of faith and service.
I understand that I only have a short time to speak so I’m tempted to accept that challenge on Dad’s behalf as only he could. Unfortunately I haven’t inherited the steel trap mind, enormous catalogue of knowledge, depth of foresight, and experience at holding court to do him justice. Even so I will do my best to honour him in my limited capability.  I know he would be encouraging of any genuine effort.


Sixty Four years ago a young chap made a promise, to love honour and cherish till death do us part.  Today we are here as witnesses to the finalisation of that promise.  But as we have come to know of that now older Chappie and the stories he would tell, we suspect there is a hidden story yet to unfold. But what of the story in between?  When we look at Dad we see a man dedicated to serving others. The foundation of that service was a strong faith in God and an inseparable unity with his life partner Ethel (playfully Erful).


It’s out of this faith and partnership that we celebrate today the life of Chappie: Mum’s beau, lover, husband; our Dad; your friend and confidente. We know dad for his patience, humour, generosity, mercy (love), grace, integrity, trust, compassion. He utilised these characteristics to teach, mentor, guide, protect, provide for, discipline, and entertain everyone who was willing to be ‘real’ and try to improve themselves.


Dad can be remembered for many things. Humour, wit and humility. Dad had descriptive sayings that sometimes need a little thought and historical knowledge to understand. In Australia’s current heatwave conditions one most likely to be heard would be, “It’s drier than the lime-burner’s foreskin.” This is typical of Dad. Always ready to challenge the norm; particularly where it was perceived that others were taking themselves too seriously, especially when that was at the expense of others; Dad’s wit could be cutting to anyone’s misplaced pride. I suppose many of us have experienced and taken insult at a rebuke but, on reflection have seen the wisdom of the well placed words and appreciated the deft and humorous delivery.  His self-deprecating  humour is synonymous with the ‘dinky di’ Australian he was.


Compassion. Dad was always willing to put himself out to help others, particularly family.  We can recall instances of Dad inviting his Dad (our Buppa by name) to live with the family when we moved to Queensland.  Mum’s partnership here is also prominent.  You cannot understand Dad without also appreciating Mum.  Those biblical words, “And the two shall become one flesh.” Is never truer than it is for Mum and Dad.  The decision to invite Buppa into our house as his eyesight and mind were failing was a burden willing borne by Mum.  Little did we know at times that Buppa used to go out the front to catch the Cobb&Co or his bushman propensity to spit out the house window that was not matched by his eyesight telling him the window was closed - even after the event.  More recently Dad and Mum moved to Bendigo to help care for Matthew’s family when Alison was really sick.


There are also innumerable people, many here today, that have benefited from Dad’s work, that is the wrong word because he would never consider it work but a privilege to help others through agencies such as Legacy, the Lodge, the RSL and other associations providing care and loving support to those who could not help themselves.
Dad has a genuine interest in people.  He spoke to everyone out of an interest in their lives, who they were.  He was always interested if he could help you in any way.


I remember his advice when I joined the Army.  It also characterises his life’s guidelines taught by example to all his kids. It was as simple as, “Be firm, fair, friendly and consistent in all that you do.”. Prior to that I’d learnt to, “Treat others as you would like them to treat you.”, and to, “Give everyone three chances (to earn your trust).”Integrity. Dad had an unbreakable column of loyalty erected in his life. There are few that can boast of a fidelity to the truth and trustworthiness of your word as Dad. While we were growing up no discipline was as great as that which followed the perception that a lie had been told.  This raised a whole bunch of other teaching points.  Be truthful, regardless of the personal cost.  This sometimes got us into trouble but has enabled us to live a life of little regret and personal contentment.
Loyalty.  You can see this passed on through the family in an often illogical and stubborn adherence to loyalty and service.  The fruits of that initial promise are six children, three who joined the Army, two the police force and one a nurse.  This legacy continues into the next generation with a number already in service with the police force and Army.
There are so many examples we can all give of a life lived in service to one partner, one family, one nation, one humanity that we would need nearly as many years again to tell them.


Let me finish by relating what I believe is the hidden part of Dad’s story of faith and service, written in the ink of his life.
Over the recent years we discussed life.  Two bible passages prompted by Dad come to mind.  One from Solomon’s book of wisdom – “A cord of three strands is not quickly broken.”.  The explanation from Dad was that: with Mum (a life partner) and God (an eternal partner) life can carry many loads much greater than any individual one could possibly bear.  The other, and pertaining very much to today was from today’s reading, Dad quoted it to me unaided. It is, “In my Father’s house are many mansions: If it were not so, I would have told you. I go to prepare a place for you.”


I firmly believe Dad, as always, perceived the bigger picture. There is more to this world than that which we see.  He saw the beauty of God’s provision in the gift of his life, his wife, his children, their children, this town and nation. He loved us and them with a faithfulness that is hard to comprehend in this day and age.  He accepted the truth of God’s word and is looking forward to the day when we will meet again at the provision of his Father’s hand in the mansions that are prepared for each and every one of us.
May your lives be enriched by Dad’s as you contemplate your future and reflect on his example and legacy.
On behalf of all of us we’ll miss you Dad.

The following article appeared in the Merimbula News Weekly on 16th January 2013:- 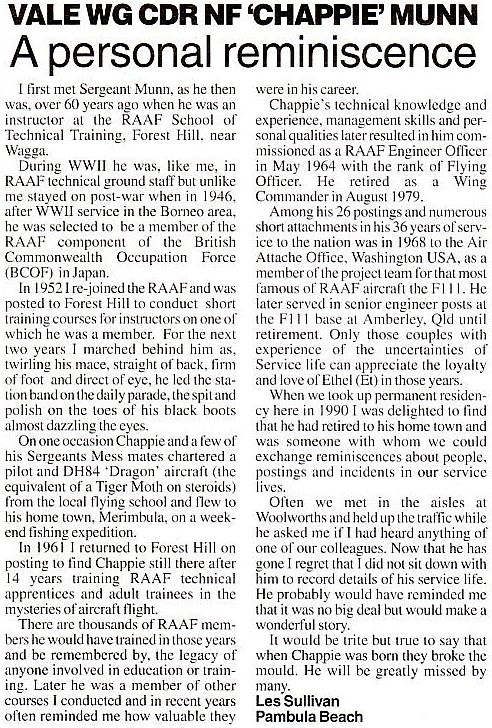 This article appeared in the Merimbula News Weekly on 9th January 2013:- 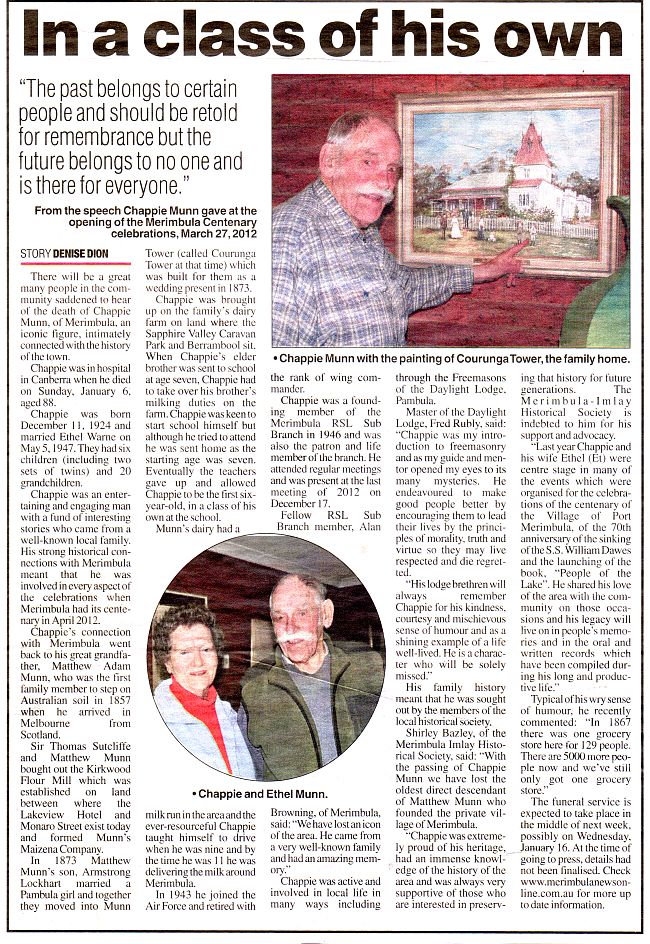 "A man dedicated to the service of others" 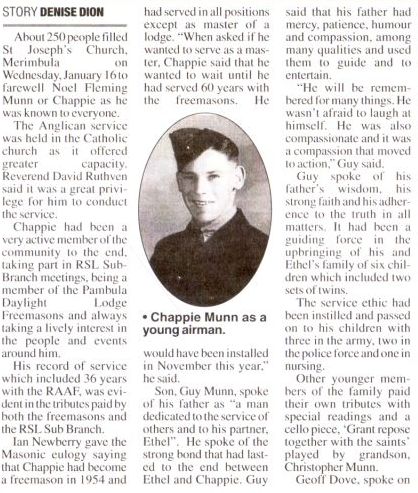 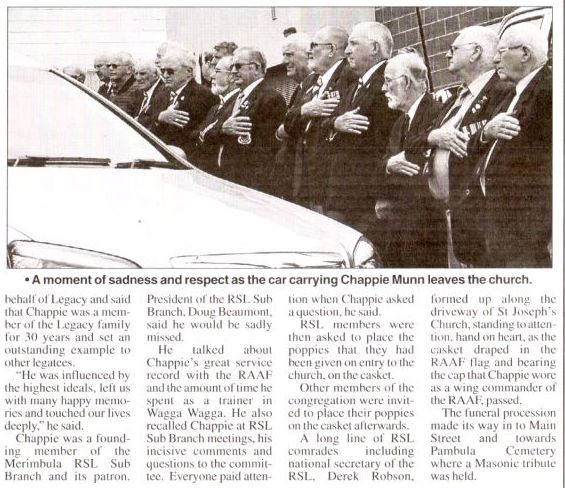 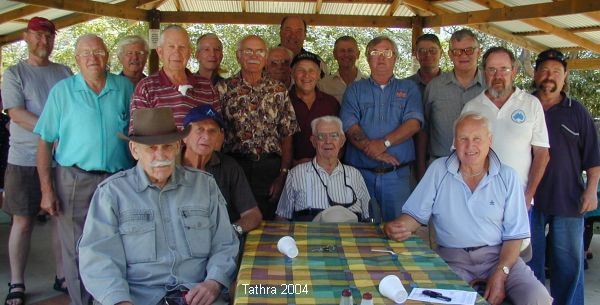 District BBQ at Mogareeka in 2004 with Chappie in his favourite gear, denim. 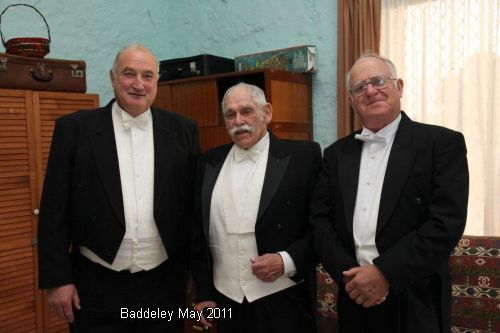 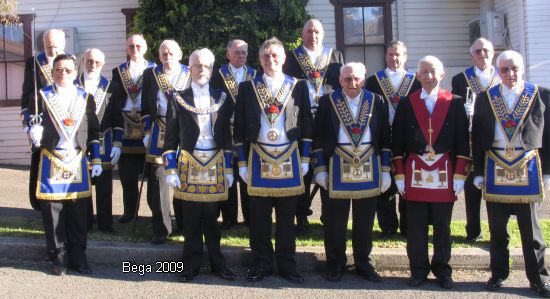 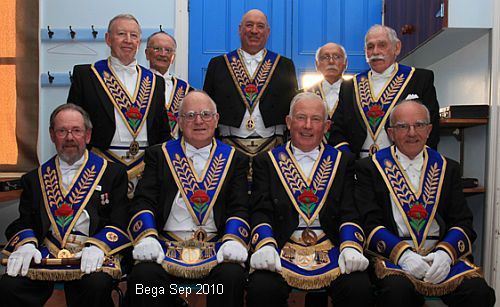 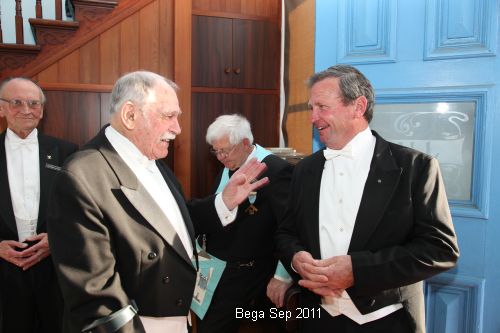 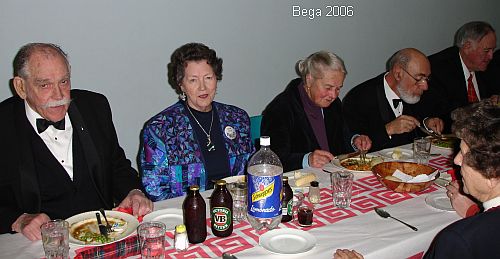 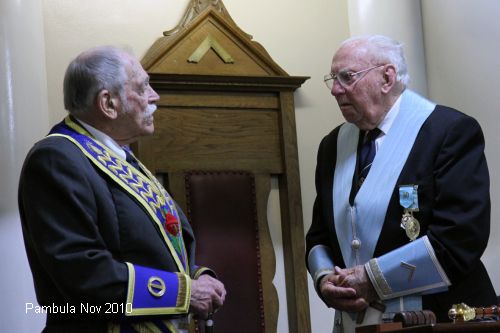 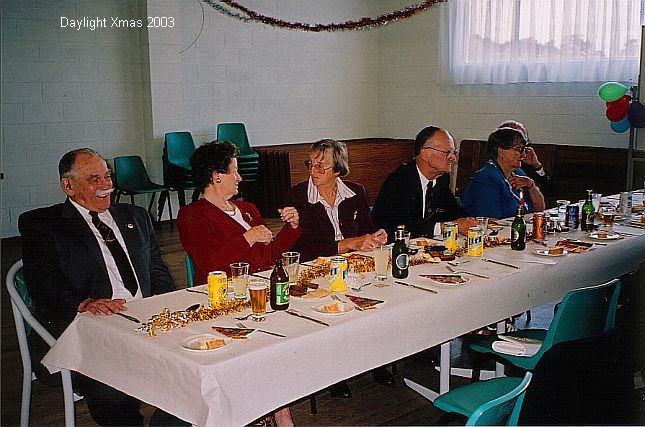 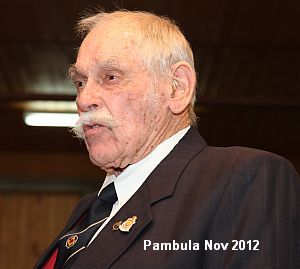 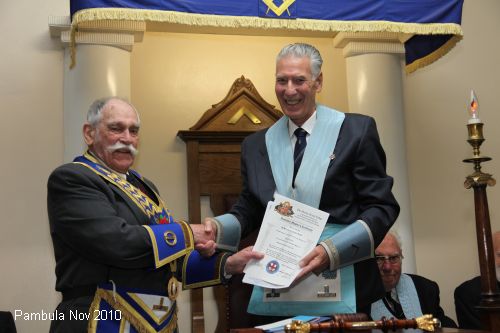 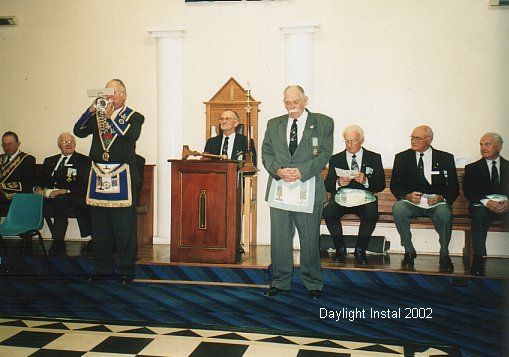 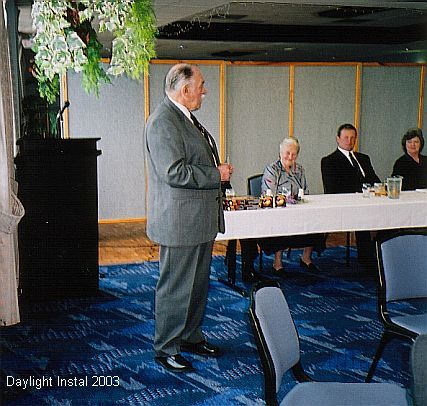 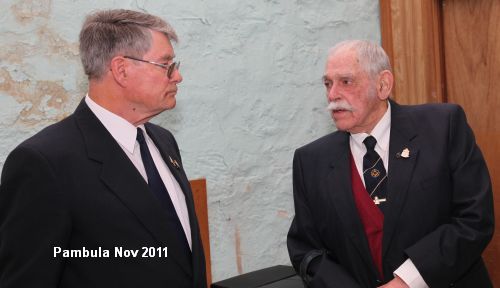 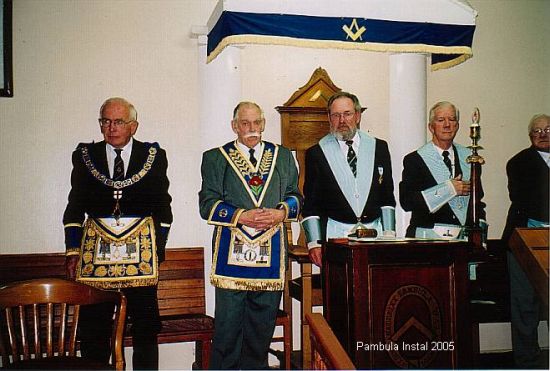 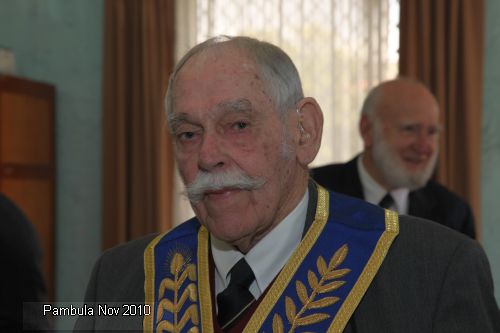