Eurobodalla Daylight Lodge was honoured with the presence of the Grand Master at their 2014 installation meeting held on 22nd August at the Moruya Masonic Centre. The Grand Master was accompanied by the Grand Director of Ceremonies, RW Bro Peter Radcliff, a Grand Steward, W Bro Jason Cutler, while two local brethren acted as Grand Sword Bearer, RW Bro Ted Herring, and Grand Standard Bearer, VW Bro Kit Lee. RW Bro Graham Charlton, PAGM, and RW Bro Wal Hopkinson, PSGW travelled from Canberra as did the Regional Grand Counsellor RW Bro Geoff Ludowyk. Also in the photo is the DGIW for District 114, VW Bro Ray Johnson. On the GRand Master's right is RW Bro Ralph Britten, PAGM, who is a member of the Lodge but travelled from his home town, Sydney, for the event. The DGIW for District 105, VW Bro Kevin Mulcahy was also in attendance taking the photo.

The reinstallation of W Bro John Sharpe was witnessed by some 40 Brethren and was very capably carried out with expertise and feeling by VW Bro Rex Williams, the founding Master of the Lodge. Below is a photo of the WM and his Officers for the coming year.

Eurobodalla Daylight has a tradition of presenting an outgoing Master with a very beautifully turned walking stick know affectionatley as a "two-ball-cane'. These canes are only presented to brethren who have actually been through the chair of the Lodge but on this occasion one was presented to the Grand Master who was obviously very touched by the gesture. Below is a past photo to show the canes which are turned By W Bro Roly Hammond and finished off by RW Bro Alan Brown. 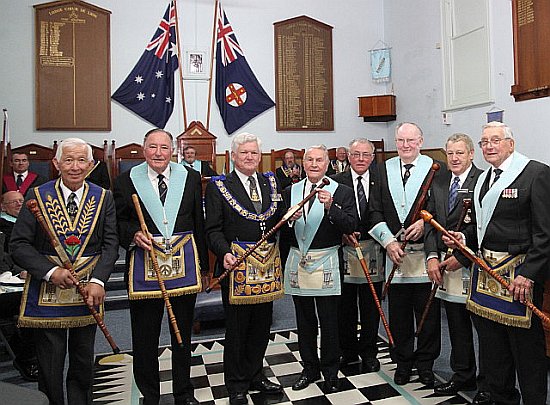 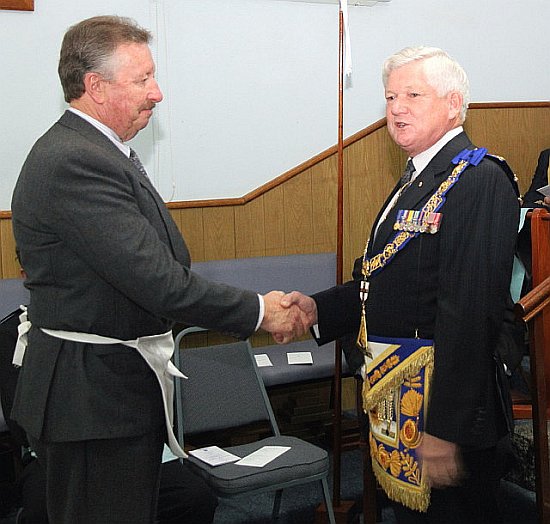 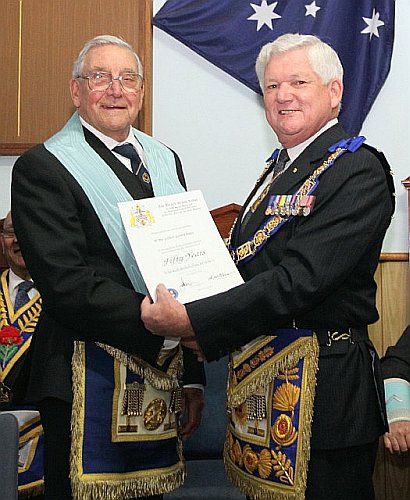 The Festive board Top Table and the other tables were beautifully decorated by the Ladies which created a warm and friendly atmosphere for the proceedings that followed. 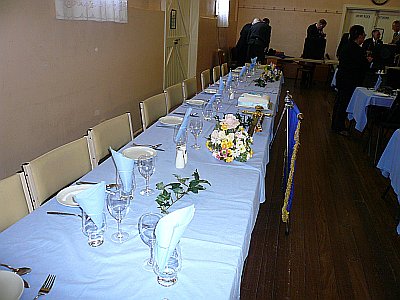 The Grand Master responding to his toast. There were around 60 seated for the festive board which also included a ceremony of handing over the travelling gavel from the previously installed Master who on this occasion was W Bro Bates the Master of Batemans Bay Daylight Lodge. The gavel ceremony has been a part of the traditions of Distirct 114 for many years and will continue to be carried on with the new district arrangements from 10 September 2014. 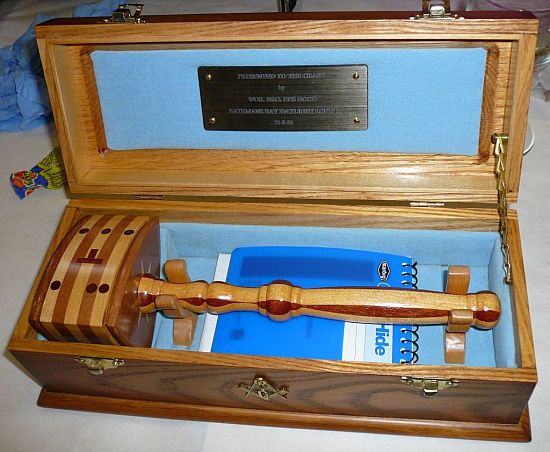 The newly reinstalled Master, W Bro John Sharpe, made a presentation to the Grand Master's partner of a small gift in remembrance of her visit to the Lodge and extended the Lodge's appreciation in being able to enjoy their company not only on the day but also at an informal dinner on the previous night. It was a wonderful day which was enjoyed by all who attended.