The South Care Helicopter appeal is a cause worthy of the attention of all Freemasons in region 10. As recently as Last week one of our Brethren was transported from Bega to Canberra.

The web site is here and details of the appeal are below.

Australia’s capital city is surrounded by mountains, vast plains and the sea. There are many rural and remote settings in which people are injured or have life threatening illnesses. When I came to Canberra as a neurosurgeon, patients were dying on their way to hospital simply because of the time it took.  We had the occasional mercy flight from the army rotary wing unit then at Fairbairn, but that was moved to Queensland.   We also had had to rely on sporadic mercy missions from the fleet air arm at Nowra before it was abolished, or use inadequate road transport.  Ambulance officers were not allowed to intubate patients. The concept of the intensive care ambulance was not born. Now there is often more than one helicopter mission a day.

SouthCare commenced on 1st October 1998. In its establishment , we owe our thanks to both Senator Gary Humphries and ACT Minister of Health at the time, and to Mr Len Goodman AO who put the whole community behind the venture in his capacity as District Governor of Rotary International District 9710 and then as Chairman of the Southcare Trust Fund. In 2006, he handed that Chair over to David Marshall, AM. The same aircraft, a Bell 412 recently refitted is doing a sterling job. You may have heard masons have different kinds of grip. It is a coincidence that the type of flight control grip, with its buttons and switches and cyclical movements used in this helicopter is called a Mason grip by the manufacturer.

Now fifteen years later, the service has saved many lives and prevented added disability by the excellent work of flight crew, the paramedics, and the doctors of the Canberra Region Retrieval Service. In this, we acknowledge the enormous contribution of the late Dr Damien McMahon who passed on suddenly only a few weeks ago while on a visit to Jerusalem.

Community support has always been important to SouthCare and this has proved a great catalyst to uniting the efforts of the ACT and New South Wales Governments, otherwise not always the case. Today the Capital Region Retrieval Service and SouthCare work well together in an integrated way to save lives. It also saves money – have you any idea how much all the death and disability would cost if it was not there.

MasoniCare has a disaster relief programme for major disasters.  SouthCare helps to minimise our local disasters on a one by one basis across the ACT and southern NSW. Every day there is a task or 2 or 3. In one memorable day in June 2012, there was response to no less than five missions in 24 hours. So we now have a defined partnership between masoniCare and Snowy Hydro SouthCare and the wide support of free masonry across 53 lodges in the ACT and southern NSW for this vital need.

At the official Launch of the Freesmasons Appeal for Snowy Hydro SouthCare by the Grand Master Mw Derek Robson on Sunday afternoon, 23rd September, he noted that 53 lodges were in the area of operations of the aeromedical rescue service which extended from The far south coast to Orange in the north, as far west as Forbes , Cobargo and West Wyalong and south to the Victorian border from Eden to Denilquin. A number of  lodges and individuals had contributed to the funds raised in the three months leading up to the launch but this was only the start and  it was hoped all would be involved in future fundraising for this . The Grand Master noted that masoniCare had contributed $5000 by way of an interaction grant to Lodge Commonwealth of Australia 633 and he paid tribute to the continued support for the appeal from RWBro Graham Davies, Masonicare manager South.

In his address the Grand Master expressed his appreciation for the support of the brethren of the 53 lodges scattered around such a huge area of south-eastern NSW and ACT which is being serviced by SouthCare.  He saw it as great interaction between Freemasonry and our communities and commended the organisers on their initiative.

A comprehensive outline of the operational activities performed by SouthCare was given by one of the helicopter crew, Senior Paramedic Bro Jim Tierney of Lodge Queanbeyan. A real life example of the value of our having SouthCare in our area was given by Brigadier Wayne Goodman whose life was saved by the ‘chopper when he was knocked unconscious in a fall from his bike, was rescued and taken to hospital where he awoke to find out what had happened to him.

The next informative item was a Power Point presentation on the wide-ranging activities of the Australian Maritime Safety Authority, given by a Senior Executive of the Authority, Bro Scott Milne of our lodge. Examples were shown of marine rescues and mention was made of the value of locating beacons in search and rescue operations, particularly when we are surrounded by so much ocean area.

The Grand Master then declared the Appeal open and presented a cheque to the CEO of SouthCare, Owen Finegan, who responded suitably, thanking Freemasonry for their involvement and donations.

As we were departing the pilot cranked up the ’bird’ and ferried it over to its own pad in front of the Operations Centre, ready for take-off on the next emergency call. Owen Finegan, CEO of the Snowy Hydro SouthCare Fund was presented with an initial cheque of $16,430., the total of donations to date. Freemasons of the ACT and New South Wales is now an established community supporter of this helicopter rescue service and the square and compasses logo appears in the list of supporters. With continued support, it will fly in due course on the aircraft. 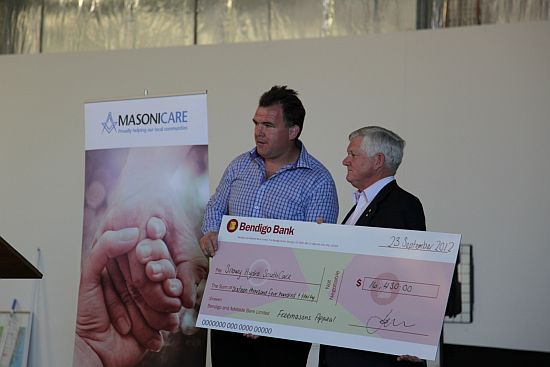 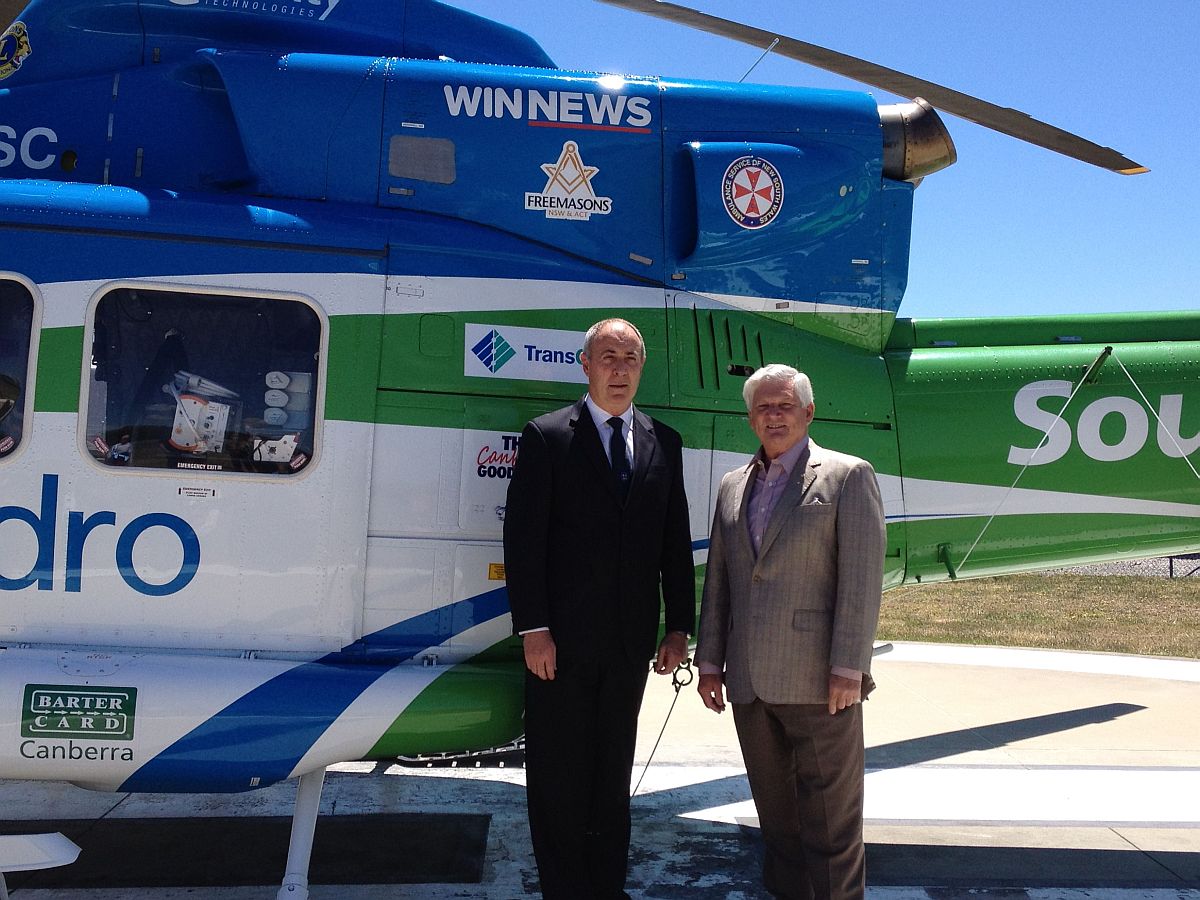 Our Square and Compasses logo proudly displayed on the airborne ambulance. 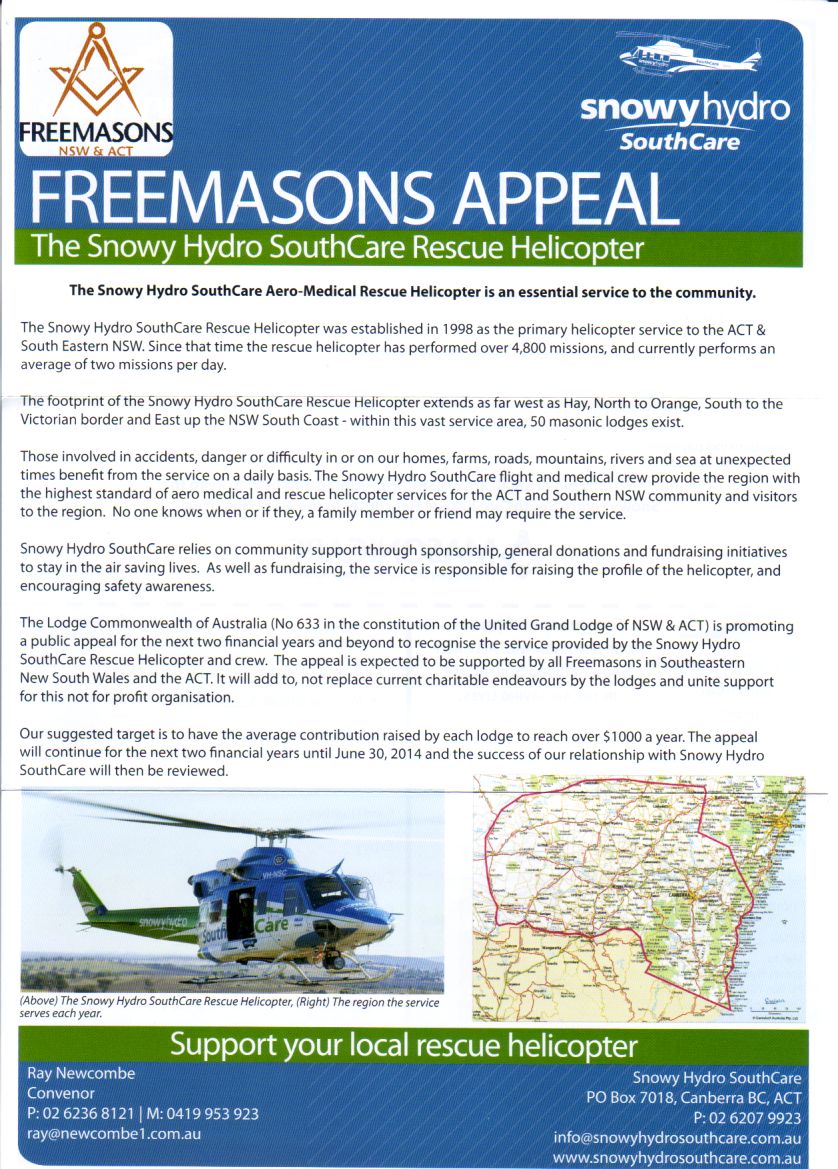 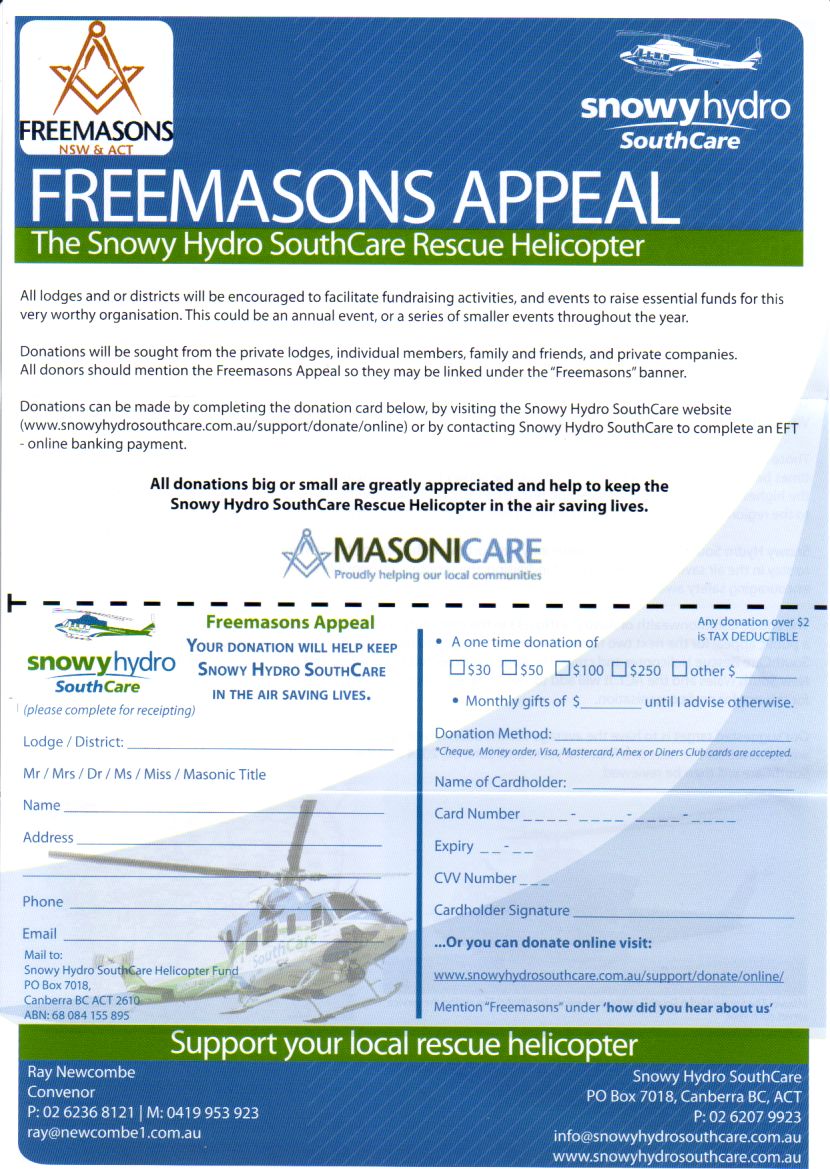